Hi guys welcome to Marketico. In recent times many updates are happening in terms of technology of earphones and buds. Previously we checked in details about Redmi Earbuds S in details but today we are going to do review on earbuds Realme Q vs Redmi S. As both are really affordable and providing overall good quality technology. Check Price on Amazon.

Let me share you below table which will give you rough idea about specifications of both the products. So you can compare it in better way and then we will discuss further review on Realme Q vs Redmi S. Check similar products.

So Let’s begin with Realme Q vs Redmi S. let me share what do I feel about the same and first as you can see both of them come in specially designed box. Redmi S box is comes in square shape and Realme in a pebble shape. Both have that matt finish. But Redmi S box feels little cheaper quality than Realme Q box as it is slightly better. And another thing Redmi S Box if you shake it makes a lot more noise. But Realme just vibrates but makes very less noise.

If you look at one more difference that Realme Q buds has actually touch capacitive buttons. But on Redmi S we have physical button and I would say the physical button is easier to use. But one good thing I liked with the Realme Q is that you can actually customize your preference. On the Realme link app. It shows you the battery life, battery percentage etc. And what I like is you can actually customize by tapping left and right. By linking with app it gives you flexibility that is offered on the Realme. And we don’t have something like that with the Redmi S.

But it will take time to understand the functions. I would say it will take almost about 30-40 minutes to get used to the tabs. Because initially it was not resisting it was racing you have to tap and just wait for a half a second.  So that is one thing is that app for functionality is there so you can customize what you want.

Another important with Realme buds is the battery life that you would get and it goes ahead compared to the Redmi. Both will give you about three and a half to about four and a half hours battery life. On the Realme It is about thirty minutes more than the Redmi.

The Realme for box you can charge it almost four to four and a half times so they rated about twenty hours. And in fact I would say the battery life slightly more than even twenty hours on Realme. Whereas Redmi it’s rated just for about twelve hours and roughly about eleven. So I would say in terms of battery life the real me gives almost double the battery life. As battery capacity is high but if you weight both the boxes it is approximately the same around 35 to 36 gms.

In terms of accessories there’s a small thing obviously this comes inside box. Let’s talk about the Redmi You get extra ear tips and a small manual that’s it. Realme you get extra two tips on so you get a manual. And you also get charging cable which is again micro USB. But strangely I don’t know why Redmi does not bundle this one in the box. So that’s other difference that you get. 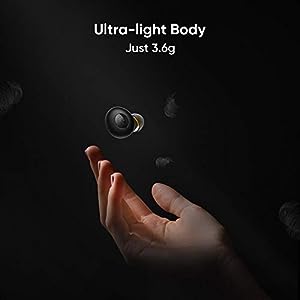 Let’s talk about one more thing there is that low latency mode with the Realme and you can switch it on within the app. Also if you just hold it for some time you can switch it on. I think that the latency was quite low. Watching videos on Netflix and YouTube you will not face lip sync issue. Even in Redmi the latency was low but we don’t have a special mode or something like that. Let’s also address two more things again both of them do have a microphone so you can take calls with both of them.

But here I think that both are neutral in sound output. That I got from the microphone was very similar in both of these so I won’t say one is good than another. And I would say the call quality is acceptable they do try to filter a little bit of but don’t expect active noise cancellation.

Now coming to Bluetooth range I would say both are sort of average range. I mean if you are in the same room they are fine. And I noticed that even if you move slightly to the next room both will not disconnect. But again if you go slightly away then yes both will disconnect. So I would say Bluetooth range is decent but don’t expect that you will just move about two rooms and will stay connected. 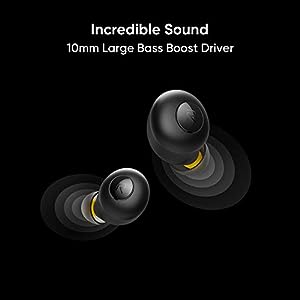 Let’s talk about the most important thing why do you get these earbuds it’s for sound quality. I would definitely say Realme is heading that area compared to the Redmi. Let’s talk about the redmi enhanced in bass quite a bit and it is getting a little bit muddy. That means you’re not enjoying the bass. It’s just becoming slightly booming and that creeps even to the mid-tones. Hence I feel that the sound quality was simply not that course. And even the higher tones was simply not produced that well. I would say again this is something very surprising because I really like the EWS to from Redmi they were superb.

But in terms of sound quality I simply did not enjoy they try to do that excessive bass but it becomes lightly muddy. And because of that the overall sound signature is not that great. Even in the high tones it was lacking.

Don’t get me wrong even Realme really does actually boost up the bass a little bit compared to normal. But I feel that kind of bass in most of you like and bass though it’s boosted does not creep too much into the mid-range hence the mid-range vocals are produced very well. And in terms of high tones also I would say it is slightly better compared to the Redmi. As I told you these are more comfortable.

I would prefer the Realme over the Redmi as overall. If I have to pick one between these two definitely in terms of battery life and Sound quality I would rate the Realme is better than Redmi.